Programmed by Munch during his years at the Boston Symphony but never recorded, his renderings of the two works featured on this DVD are exciting and spontaneous with the kind of precision and flair we have come to expect from the BSO under the buoyant direction of their charismatic Music Director.

Haydn is a composer well matched to Munch’s genial and rambunctious temperament, and this performance televised from the BSO’s ‘Cambridge series’ in the Sanders Theatre at Harvard University is delightful. Munch uses a reduced orchestra that does not play with reduced energy; that wasn’t his way. The gentle, tender rubato he brings to the slow movement, Haydn’s memorial to Mozart, is ravishing, and the momentum and brio in the faster music feel jurst right. Most important of all, both conductor and orchestra know how to turn on a dime – and that is essential to the element of the unexpected that makes all of Haydn’s symphonies, and not just No. 94. At points it looks as if Munch is letting the music bubble and course through him; he never struggles to keep it within its banks.

Bruckner’s Symphony No. 7 is as unexpected as a performance as it is as a repertoire choice. Sometimes this results from Munch’s adherence to Bruckner’s directives, sometimes it comes from ignoring them. For example, the score indicates the great Adagio should be ‘Sehr feierlich’, very solmen, but Munch makes it positively fiery. Bruckner adds that it should be ‘sehr langsam’ (very slow) but Munch chooses to move it along, clocking in at about eighteen minutes, knocking from three to five minutes off more traditional timings. Munch also belongs to the company of those conductors who don’t believe the handwritten instruction in the score to cancel the mighty cymbal crash at the climax; the handscript is not Bruckner’s. As the climax approaches Munch grins with excited anticipation; he’s worked up quite a head of steam, and the camera makes sure we don’t miss the moment when the lid comes flying right off the pot.

The camera is naturally fascinated by the unusual Wagner tubas, but Munch does not seem interested in the traditional heavy-brown-gravy Bruckner-sonority; instead everything is bright and clear and forward-mmoving, and the climaxes are paroxysms. The Scherzo is particularly exhilarating at Munch’s tempo, and the patrician conductor has no problem getting down into the rough rural mode.

Munch’s results are, according to taste, garish, rushed and unconvincing, or illuminating in the way that contrarian views often are. He does observe, or invent, the ‘frequent changes of tempo not noted [in the score]’ that Bruckner wrote of in a letter to the conductor Arthur Nikisch (one of Munch’s predecessors as BSO music director).

And, if you invoke another criterion, Munch’s performance is authentic because this is how he learned it in his gallery years as an orchestral player, how he feels and hears the music, how he believes it should go. And the audience that night in Sanders Theatre didn’t seem to mind at all. 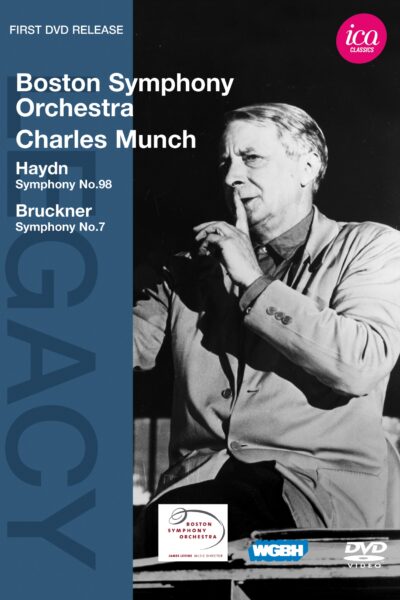