This 1955 recital, only Cziffra’s second studio recording is totally free from eccentricity and represents Cziffra at his best. It features miniatures (CPE Bach, Scarlatti and Couperin) as well as the Liszt war horses which Cziffra became famous for. The two bonus tracks come from a 1959 recital in Turin, which show off Cziffra’s dazzling technique. The Bach arr. Liszt: Fantasy & Fugue, like the rest of the CD, has never appeared on CD before. It is extremely rare having been remastered from a collector’s LP using ICA’s Ambient mastering Process. 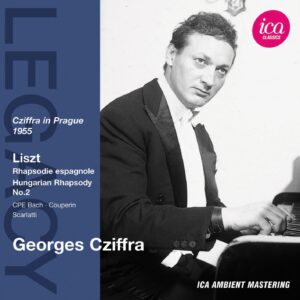